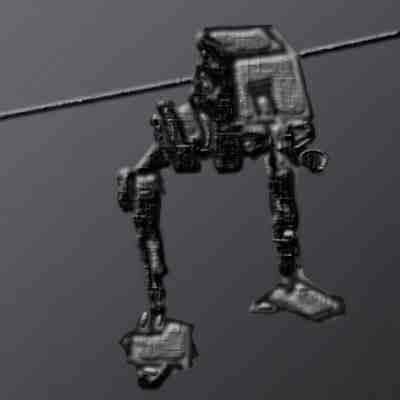 Description: Although the AT-ST was extremely common the demand for walkers to act as symbols of the Empire in patrolling pacified worlds was higher than the Scout Walkers relatively high cost allowed commanders to procure. It became clear that a cheaper alternative was needed, something that led to the design and production of the Light Scout Walker, a vehicle designed to deal with lightly armoured vehicles and infantry. The AT-LST kept the Light Blaster cannons of the AT-ST, but replaced all other weapons with a single repeating blaster, the stripped down frame allowed a higher top speed and more manueverability, and the smaller weapon load allowed control by a single pilot with space for two passengers. However the light armour made these easy targets for enemies, and they were only deployed in secure areas where they were used as police and security vehicles instead of landspeeders and other lighter vehicles.

Page designed in Notepad, logo`s done on Personal Paint on the Amiga.
Text completely by FreddyB. Images from Dark Empire by Dark Horse Comics, copyright remains with Dark Horse, image processed and provided by Gunhamster.
Any complaints, writs for copyright abuse, etc should be addressed to the Webmaster FreddyB.