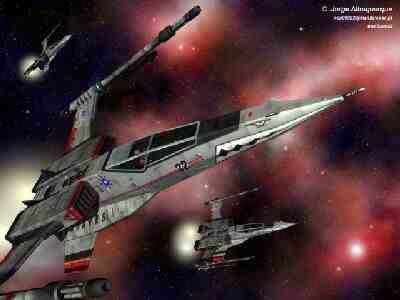 Description: The Incom "Line" Fighter began production shortly after the founding of the New Republic, and was created to cash in on the success of the X-Wing. The Line fighter is a very similar design to the X Wing and uses many of the same components, it however is not a military fighter, and is noticably cheaper as a result. Designed to be an X Wing for civilian and mercenary use, the "Line" has only 2 wings and 2 engines making it slower and less well armed than the X Wing, it however does not require an Astromech, and is much loved by its owners some of whom prefer the anonymity of flying a civilian fighter instead of one obviously belonging to the Republic.

Page designed in Notepad, logo`s done on Personal Paint on the Amiga.
Text completely by FreddyB. Image is from Wing Commander, and copyright resides with Origin Systems.
Any complaints, writs for copyright abuse, etc should be addressed to the Webmaster FreddyB.