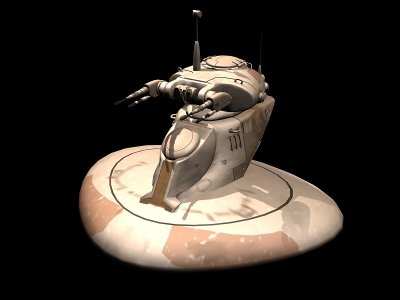 Description: Designed and built by the Baktoid Armor Workshop for the Trade Federation, the LST series of repulsorlift tanks effectively patrols and scouts in advanced of the front lines. Routine patrols are anything but routine now. Recon units can expect to face large detection networks and aggressive enemy patrols. They must often defeat sophisticated sensor networks and stab thorough electronic jamming to report their findings. To help the often outgunned STAP units the Trade Federation has issued the Baktoid Armor Workshop Light Scout Tank. The tank is equipped with a powerful radio, a secondary communications system, target designator, ECM and ECCM pods and a satellite uplink. The LST armament is considerably downgraded from the ATT because its primary mission is not combat but information gathering and reconnaissance. The LST has been in service for only 10 standard years, however It has seen a lot of action especially during the Battle Of Lok where it played a crucial role in deep recon patrols. The LST continues to support The Trade Federation and The Confederacy of Independent Systems well into the second wave of the ongoing Clone Wars.