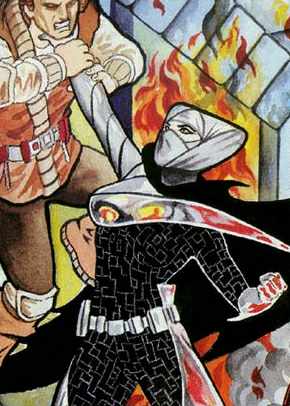 
The months following the Battle of Hoth were especially trying for the heroes of the Rebellion. With morale crushed following the abandonment of Echo Base and the capture of Han Solo, the Rebels faced the unthinkable possibility that Luke Skywalker had killed a fellow Rebel pilot.

Following the Alliance relocation to a temporary outpost on Arbra, Luke struck up a close friendship with fellow Rogue Squadron member Shira Brie. She was bright, talented and beautiful, and their friendship evolved into something closer. Rogue Squadron was then pressed into service striking at a secret Imperial armada, infiltrating the fleet aboard captured and modified TIE fighters.

The TIEs were outfitted with transponders that allowed the Rogues to identify each other amidst the enemy ships. During the thick of battle, Skywalker's transponder malfunctioned. He was unable to determine which of the surrounding starfighters were in fact his allies. Forgoing technology as he had done during the Battle of Yavin, Luke instead relied upon the Force. He used his instincts to pick his targets, and fired at advancing enemy craft. One of the vessels that Luke shot out of the skies was Shira Brie's.

Returning to Arbra, Skywalker did not find a hero's welcome. His rank and service were suspended until Alliance analysts could determine just what had happened. Shaken, Luke began to question his faith in the Force. Skywalker, accompanied by the Wookiee Chewbacca, left Arbra to conduct their own investigation. They journeyed to Shalyvane, supposed homeworld of Shira Brie. There, they learned the truth of this enigmatic woman.

Shira Elan Colla Brie was born on Coruscant, and spent her life serving as a key agent of the Empire. It was Darth Vader who handpicked Brie for accelerated training in Imperial Intelligence. Her mind was enhanced through mnemonic drug training, her body hardened through expertise of exotic martial arts. Proving herself a capable agent, Brie was dispatched by Vader to infiltrate the Rebel Alliance.

One of her primary goals was to discredit Luke Skywalker. Vader hoped that his son, finding no quarter within the Alliance ranks, would eventually wander back to him. Brie almost succeeded when Luke destroyed her fighter, but Skywalker was able to prove his innocence, and reveal Brie's past.

Shira did not die in the TIE fighter incident. Her crippled body was gathered by Vader's agents, and she recuperated within secret chambers aboard the Super Star Destroyer Executor. Vader watched closely as Brie's body was rebuilt and enhanced through mechanical implants. Fueled by rage and an already promising strength in the Force, Brie emerged from the bacta tanks a changed woman. She had given in to hatred, and was renamed the Dark Lady Lumiya. Impressed with his pupil's development, Vader began to hone her Force abilities.

Vader knew that no secret could be kept from his master, the Emperor. He presented Palpatine with Lumiya as a gift -- as a new Emperor's Hand. Palpatine accepted, and Vader continued her training. Lumiya was sequestered on the ancient Sith world of Ziost when the Battle of Endor forever changed the Empire. It was on this frigid world that she crafted her unique weapon -- a lightwhip built of Kaiburr crystal shards and Mandalorian iron.

Lumiya then emerged as the cyborg chief of security for the slaving guild on the planet Herdessa. She attempted to arrest a visiting Princess Leia Organa, but was thwarted by a revolution against the guild. Though Lumiya sustained a blaster wound, she survived the battle to swear vengeance on the Alliance.

She then surfaced on the planet Kinooine, with her collection of Imperial forces allied with fearsome Nagai invaders. On Kinooine, Luke Skywalker and Lumiya were finally reunited, and the two engaged in a spectacular duel. At first, Lumiya bested Luke, as well as brutally wounding his allies Dani and Kiro. In their second battle, Skywalker managed to defeat Lumiya, shattering her armor, and revealing her to be Shira Brie.

In the nebulous and shifting alliances that plagued the Imperial fragments during the Nagai invasion, Lumiya attached her Imperial resources -- which included three Star Destroyers, two frigates and four corvettes -- to the alien fleet belonging to the Tofs. When the Tof incursion was eventually repulsed, Lumiya disappeared from the galaxy. Her current whereabouts are unknown, but she did leave behind a legacy of at least two pupils -- a young man named Flint and a treacherous Royal Guard named Carnor Jax.


Page designed in Notepad, logo`s done on Personal Paint on the Amiga.
Stats by FreddyB, Descriptive Text and Image is from Wikipedia, copyright remains with LucasFilm.
Any complaints, writs for copyright abuse, etc should be addressed to the Webmaster FreddyB.