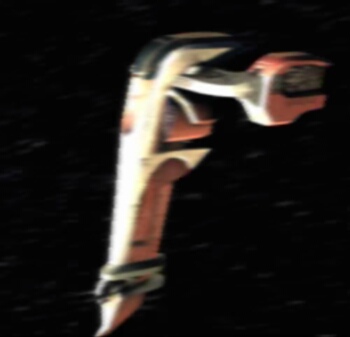 Description: The L-Wing Assault Starfighter is the most heavily armed starfighter fielded by the Old Republic at the time of the Sith Wars against the Dark Jedi Revan and Malak. These fighters are the ancient ancestors of the B-Wing Starfighters used by the Rebellion during the Galactic Civil War, being produced by Korpil Light Engineering a Verpine corporation which later relocated to the Roche Asteroid field and merged with Slayn AstroTechnologies. The L-Wing is a robust and heavily armed fighter, carrying the heaviest projectile weapons available at the time, Concussion Spheres, allowing it to inflict damage on Capital ships especially when wings of these fighters co-ordinated their attacks on a target. L-Wing's served alongside W-Wing Interceptors launching from Republic Frigates and Gunships, helping win the war against the Mandalorians, although they were totally outclassed by the StarForge created Sith Starfighters in the later Sith War.


Page designed in Notepad, logo`s done in Personal Paint on the Amiga.
Text by FreddyB. Image is from Knights of the Old Republic, copyright remains with BioWare / LucasArts.
Any complaints, writs for copyright abuse, etc should be addressed to the Webmaster FreddyB.