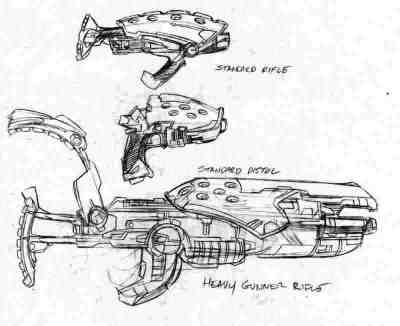 Description: Designed to replace the older M-9 Blaster Rifle, the M-5 Radiation Disruptor Rifle is only slightly more dangerous, but offers a significantly shorter range and lower ammunition capacity. This has left this weapon not being adopted by the entire Mandalorian army, but the improved ruggedness and damage has led some to believe it is a finer weapon than its predecessor. This weapon is not normally available for sale on the open market, however when occasional models are sold on the black market they reach a very high price, hence the high list price.

Description: The M-2 has been adopted by the Mandalorians as their pistol of choice, with a greater range and capacity than most other Blaster Pistols, even Heavy Blaster Pistols. However it pays for this along with its high damage by having an energy clip only very slightly larger than other Heavy Blaster Pistols. The M-2 is a tough and rugged weapon that can take a lot of abuse and still remain functional, the high listed cost is a collectors cost showing what this weapon can fetch on the black market although they are not normally available for sale.

Description: The M-12 Repeating Radiation Disruptor Rifle is the heaviest man portable energy weapon used by the Mandalorian Military. More dangerous than even an E-Web Heavy Repeating Blaster, the M-12 is capable of taking out most repulsorlift vehicles, and even tanks and walkers on lucky hits. The M-12 is known to have some heat dissapation problems which can cause weapon cut outs in warm and hot environments, but the Mandalorian designers of ths weapon are known to be working on the problem and hope to have it solved soon. These weapons are not sold on the open market, and in the very rare occasions that they reach the black market they sell for an extremely high price, as demonstrated by the listing price.


Page designed in Notepad, logo`s done on Personal Paint on the Amiga.
Text completely by FreddyB. Image is from a Web site which I`ve now forgotten, and copyright resides with the artist.
Any complaints, writs for copyright abuse, etc should be addressed to the Webmaster FreddyB.