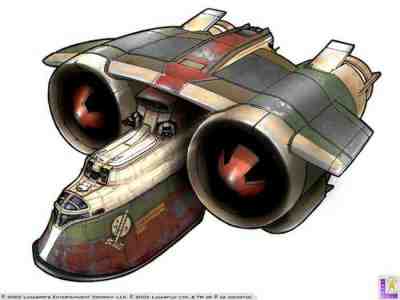 Description: 4000 years before the Galactic Civil War, the Mandalorians did not have the manpower to wage a full war against the Republic, so sent raider teams to spread terror through the republic. These teams knew they were on virtual suicide missions, which may last years, so were well trained and well equipped on their departure. The Triumph Transport was the ship used by the majority of these teams, and for a 4000 year old vessel is still extremely fast and well armed. Some of these vessels remain with the families of the few teams that returned, but also many were captured when the raider teams were defeated. And while servicable vessel in their own right, most will have been refitted over the intervening centuries, most especially the Proton Projectile Launchers for which ammunition is incredibly rare. The Triumph is loaded through a large rear ramp, which is wide enough for most repulsor lift vehicles (up to medium tanks), and has a waterproofed hull, allowing the vessel to land on water as well as it can on land, a huge advantage for the raiding teams, since most cities have bodies of water in them, allowing them to avoid the defences on the outside of these cities.


Page designed in Notepad, logo`s done on Personal Paint on the Amiga.
Text completely by FreddyB. Image is by Lucasarts, and copyright resides with them.
Any complaints, writs for copyright abuse, etc should be addressed to the Webmaster FreddyB.