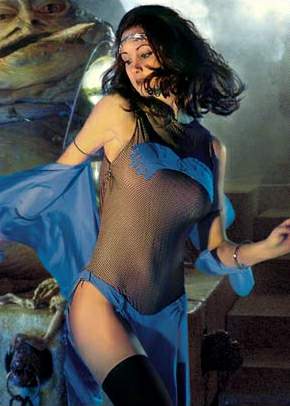 These are the known powers Mara Jade Skywalker possessed and it is believed that she had access to other powers.


Luke Skywalker's life has been indelibly changed by encounters with remarkable people. But if ever one person can be said to have had the greatest impact on his life, it is his beloved wife, the fiercely independent and stubbornly determined Mara Jade. She was once known as the Emperor's Hand -- a highly skilled assassin and operative who could hear Emperor Palpatine's bidding from across the galaxy. Trained since childhood and honed into a weapon, Mara learned self-sufficiency, piloting, marksmanship and talents in the Force while serving her dark master.

One of her last missions was the assassination of Luke Skywalker. Emperor Palpatine was dismayed by the changes in Vader following the Dark Lord's lightsaber duel with his son on Bespin. Skywalker had stirred something in Vader, and the Emperor distrusted his closest agent. As a contingency, the Emperor dispatched Mara to track down and kill Skywalker.

Mara knew that Skywalker would attempt a rescue of his imprisoned friend, Han Solo. She infiltrated Jabba's palace, posing as a dancer named Arica. She failed to get close enough to Skywalker, and Jabba refused to let her attend the execution party heading out into the desert. She missed her chance.

A perfectionist, Mara could not abide failure. She wished to make it up to her dark master, but never got that chance. In mid-transit back to Coruscant, Mara felt the Emperor's death through the Force.

Her entire life of high-placed contacts, elevated status, and lifelong purpose collapsed with the defeat of the Empire at the Battle of Endor. Through the Force, Mara received fragmented images of the Emperor's final moments. Luke Skywalker was there... as was Vader... and the two murdered her mentor.

For years, she blamed Skywalker for Palpatine's death and the loss of her purpose. Mara floated along the fringe of galactic society in the years after the Battle of Endor. She eventually found herself as a pilot and operative in Talon Karrde's smuggling organization.

During the events of Grand Admiral Thrawn's campaign against the New Republic, Mara came face to face with Luke. The two had to cooperate to survive the wilderness of the planet Myrkr. They settled on an uneasy peace -- and Luke explained that it was not he who had killed Palpatine, but rather it was Vader.

Witnessing Luke Skywalker's Jedi abilities, Mara developed a begrudging respect for the war hero. Though she openly and brusquely questioned many of his philosophies, the two were often paired together during the Thrawn crisis, and their talents complemented each other perfectly time and again. Following the defeat of Thrawn, Luke gave Mara the gift of his first lightsaber, a weapon long thought lost but recovered by agents of the Empire.

Mara didn't want to be saddled with commitment to Skywalker's new Jedi order, so she refused his invitation to train. After all, she had survived all this time on her own, and had supplemented the Empire's finest training with hard-earned field experience. She had long been independent and the baby-steps of Luke's Jedi praxeum had no place for her. Still, in her efforts to master her talents, she came across Kyle Katarn, another self-trained Jedi who had ignored Skywalker's invitation. The two trained together for a while, but the dark side crossed their paths. Realizing the dangers of the Force, Katarn admitted that the group learning experience of Skywalker's academy had its benefits, and became one of the first students. While Mara did visit the academy on occasion, she did not become a full-time student.

Mara focused on her career in the fringe, accepting increased responsibility in Talon Karrde's newly formed Smugglers Alliance. She undertook a number of information-gathering missions, pairing with Lando Calrissian on occasion. Despite the dashing gambler's best efforts, he was never able to woo Jade into anything other than a strictly business relationship.

Karrde, who was grooming Mara to be his successor, wanted her to gather an even wider variety of skills. Mara became increasingly independent in the following years, loosening her ties with the Smugglers Alliance.

During the Camaasi Document incident, Mara was investigating Chiss activities on the distant world of Nirauan. She once again teamed with Luke Skywalker as they infiltrated the mysterious outpost known as the Hand of Thrawn. Together, their skills and personalities strengthened each other perfectly; if not for their pairing, they would have perished.

It was then that they realized how perfect a match they were. Despite a decade of tension between the two, and a relationship that started with near-violent acrimony, the two had fallen in love.

Following the peace treaty that brought a formal end to the Galactic Civil War, Mara Jade and Luke Skywalker wed on Coruscant. For a galaxy undergoing seismic political change, the two represented an inspiring ideal and a powerful symbol. A former Imperial agent and the galaxy's most powerful Jedi Master had found a way beyond their past differences to find love.

The New Republic, long plagued by war and insurgents, was eager to embrace a time of peace. While Luke continued to train new initiates at the Jedi academy, Mara kept up her contacts in the fringe. She took Luke's niece, Jaina Solo, as a Jedi apprentice. This tranquility, unfortunately, was short-lived.

It began in a subtle, insidious fashion. While on a diplomatic mission to Monor II, Mara was secretly infected with a coomb spore, a deadly bio-engineered pathogen crafted by the Yuuzhan Vong. When the full invasion of Yuuzhan Vong forces began, Mara was already weakened, tapping into the power of the Force to sustain her life. Mara focused the Force within her to cleanse her body of this infection. The process was exhausting.

It was during this illness that Mara discovered she was pregnant. This galvanized her resolve to fight off the disease. She carried the child to term, and the healing glow of the Force bolstered by the love of mother, father and newborn son finally cured Mara of the Yuuzhan Vong sickness.

Despite the carnage and destruction sweeping the galaxy, there was a quiet moment affirming life and hope as Mara Jade Skywalker and Luke Skywalker welcomed their infant son Ben into the world.

This peace was short-lived as the Yuuzhan Vong attacks continued to weaken the New Republic and diminish the Jedi ranks. Mara, aboard her Jade Shadow starship, continued flying missions against the invaders while her son was safely sequestered on the Jedi safeworld code-named Eclipse.

Together with her husband, Mara voyaged to the conquered world of Coruscant, to investigate strange stirrings in the Force. The once gleaming metropolis world was overgrown with Yuuzhan Vong organic technology, transformed from a modern city to a fetid jungle. In the planet's depths, Mara used her still-functioning access codes to reveal the source of the Force-disturbance. Irek Ismeren, the son of a fellow Emperor's Hand, was corrupted and reformed as Lord Nyax, a dangerously unstable Dark Jedi.

After defeating Nyax, and participating in several key missions against the Yuuzhan Vong, Mara is once again next to her husband as he seeks to find an end to the war. Aboard the Jade Shadow, and along with a team of fellow Jedi, Mara and Luke voyage into the depths of the Unknown Regions, seeking the mysterious world of Zonama Sekot that may hold the secrets of ending this long and bloody conflict.