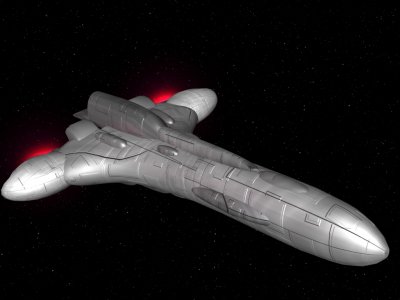 *: Mon Cal Ships have 4D of back up shields. When a die of shields is lost, if the operators can make an Easy - Capital Ship Shields total, one of the back up die codes of shields can be brought up to increase the shield back to 3D.


Description: Although the Mon Calimari have a long peaceful space faring history, they have been forced into war twice, the second time was their long contribution to the Rebel Alliance and New Republic, the first however was when the Quarren separatists joined the confederacy against the Old Republic. With battle raging in the seas of their home world, the Calimari needed to stop aid reaching the Quarren seperatists and to control the space around the planet and its colonies to stop orbital bombardment and attack. The Mon Cal Attack Cruiser was the starship built for this purpose, although primative by modern standards, it bears some similarities to the later Mon Cal star cruisers and was a powerful vessel in its day. As the Clone Wars ended, these vessels were sold off as the Emprie guaranteed safety for all and as many planets, Calimari and Alderaan fore example, swore to end all war forever. The Mon Cal Attack Cruisers ended up serving in the Old Republic Navy for a short while, before being sold off as military surplus to some planetary governments, being of special interest to other aquatic species. These vessels however never met the doctrines of the Empire, so were never forced into the situation of fighting against their creators, although some ended up in the Rebel Fleet, and a couple were used by Imperial Intelligence in operations against the Calimari star system.