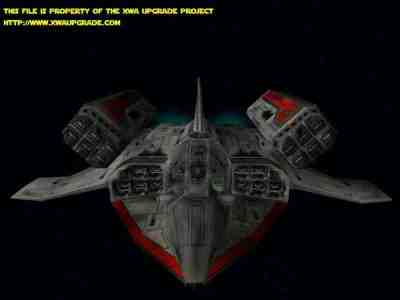 Description: The Missile Boat is an upgrade of the Imperial Gunboat, and if mass produced could have caused even heavier losses to Rebel forces than they were already forced to endure. Although slower than the Gunboat, its heavier armour serves it well in combat, and the reduced energy weapon load is easily countered by its huge racks of missile launchers which can even manage to smash capital ships if so required. The Missile Boat was originally introduced to help deal with the threat of TIE Defenders produced by the rogue Imperial Admiral, Zaarin, and advanced targetting computers are mounted within the vessel to help counter the manueverability of those fighters. Missile boats are however, extremely expensive to produce and the Empire abandoned this design so they could focus on producing TIE Bombers which could fulfil a similar role at a far lower price.