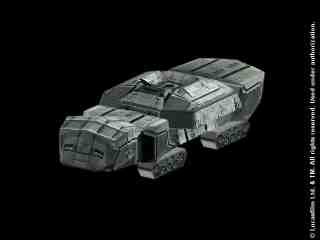 Description: The Mobile Base design was used by both the Empire and the Rebellion during the Galactic Civil War, and is a large vehicle which can carry a command staff and their support staff, as well as a few soldiers for defence. Slow and vulnerable, the Mobile Base carries communications and data processing capabilities to match a Capital Ship. Used to send orders to troops throughout a system should capital ship support be unavailable, and permanent bases lost (or not yet gained), the communications gear carried aboard one of these vehicles is not only capable of interplanetary communication, but also between systems. Although occasionally necessary, these vehicles were generally felt to be large targets, and with a lack of defences they were often lost, leaving Rebel or Imperial forces without decent command and control facilities.