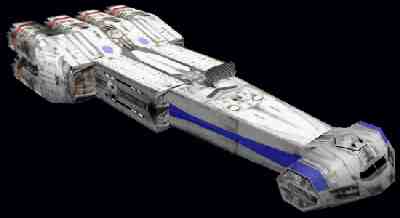 Description: The Corellian Corvette has been a successful design for many decades, but as the Galactic Civil War dragged on, these vessels which were once considered fast and well armed became average, then poor combat vessels, and for the small cargo holds they contain, they were also considered to be too expensive for transport vessels. However, never one to to let their sales decline, the Corellian Engineering Corporation began selling this modified variant of the Corvette, slightly more bulky than the original and therefore less manuverable, the design made up for it in other areas. With faster engines capable of outrunning Star Destroyers, more cargo and passenger capacity, and a wider variety of weaponry, the Modified Corvette is still not capable of equalling a front line battlecruiser or destroyer, but is more than capable of handling itself as a fast transport or courier, especially with the new added landing bays which can carry up to 12 starfighters for defending the vessel. The weaponry carried by the Modified Corvette is light for a military vessel, but with long ranged Turbo Lasers for dealing with Capital Ships, Anti Starfighter Cannons for close defence, and a heavy hitting Dual Proton Torpedo Launcher, the Modified Corvette is well rounded for a transport vessel.


Page designed in Notepad, logo`s done on Personal Paint on the Amiga.
Text completely by FreddyB, based on the original Corellian Corvette by West End Games. Image is by LucasArts, copyright resides with them.
Any complaints, writs for copyright abuse, etc should be addressed to the Webmaster FreddyB.