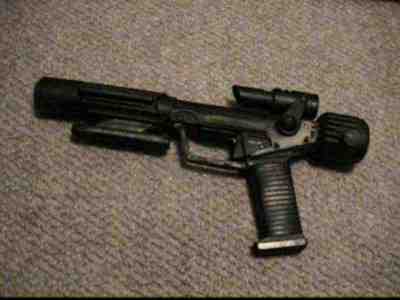 Description: Although this design was hampered with an awkward system for switching firing modes, this weapon became popular for its powerful punch, although the low range and small ammunition capability has now destined the weapon for the bargain bin. However even those desperate for a cheap weapon should make themselves aware of the weaknesses and quirks of this weapon before they buy one, since its massive flaws could easily get them killed. The combination heat sink and firing mode switch means that even after a few shots it becomes impossible to switch between stun and blast modes, and the fact that the batteries are known to leak charge, depleting ammunition without the weapon even being fired (although this problem usually only manifests over long periods). However for all of these flaws, this Blaster has sold in massive quanities if only for its bargain pricing. These sales managed to set up Mou-Gun Industries into a position where they managed to make better and more reliable weapons.

Page designed in Notepad, logo`s done on Personal Paint on the Amiga.
Text completely by FreddyB. Image is from a web page I`ve now forgotten where (Copyright resides with the artist).
Any complaints, writs for copyright abuse, etc should be addressed to the Webmaster FreddyB.