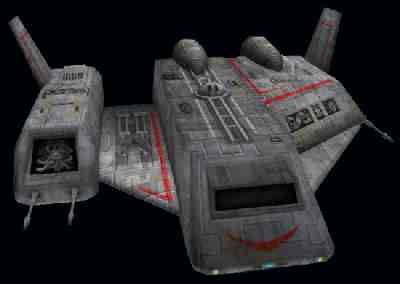 Description: The Muurian Transport is a high speed freighter designed in competition to the YT series of freighters, but although the vessel is fast and powerful, it very nearly priced itself out of the market. With a larger cargo bay than the YT series, the Muurian Transport is more than double the size of the largest YT series freighter, most of this eaxtra size being taken up by the engines, shields and weapons. The Muurian transport is more heavily armed than many military vessels, and sales were restricted during the Imperial Era, but after the fall of the Emperor at the Battle of Endor, many of the competing Imperial factions couldn't count on being supplied by Sienar, so began purchasing Muurian Transports themselves. These sales bolstered the Muurian corporation which had been floudering somewhat, allowing manufacturing of this transport to continue for quite some time. The Muurian Transport requires a large number of crew for all of its weapon systems, but can easily hold its own against even military starfighters, making it an ideal vessel for high cost cargoes, but equally good for pirates and privateers.