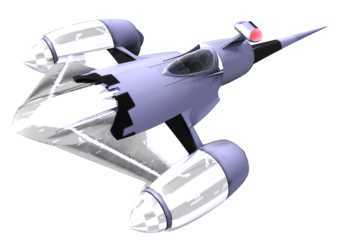 Description: With the success of the Naboo N-1 Starfighter caused by the display of its ability during the Battle of Naboo and its defeat of the Trade Federation Droid Starfighters and Droid Control Ship. The Theed Palace Shipyards decided to take advantage of the fighters instant reputation by creating variants of the remarkable and powerful starfighter. These included the Police Variant, designed for patrol of star systems, with an Ion Cannon replacing the Proton Torpedo Launcher to disable rather than destroy target vessels. Also the fighter was stripped down somewhat to reduce costs to make the vessel more attractive to purchasers, with the hyperdrive, astromech slot and some of the consumable storage facility all removed, which at least allowed manueverability to be enhanced as well as providing the fighter with marginally larger cargo capacity. The N-1 Police wasn't as successful as the standard N-1 Starfighter, but the sights of its warning lights and distinctive blue paintwork became a recognisable sight throughout the galaxy.


Page designed in Notepad, logo`s done on Personal Paint on the Amiga.
Text completely by FreddyB. Image is by Chris Boudreaux, copyright remains with LucasArts.
Any complaints, writs for copyright abuse, etc should be addressed to the Webmaster FreddyB.