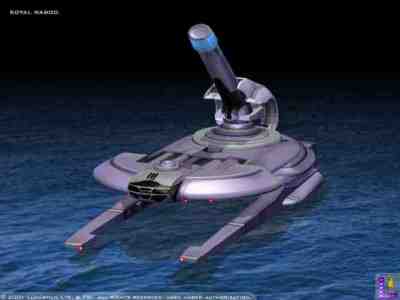 Description: The Naboo Destroyer was designed and built by the people of the planet Naboo after the invasion by the Trade Federation. The people of the planet, had been herded up and put into holding camps, so when the invasion was repelled the sought to avoid a repeat at all costs. The Naboo Destroyer was a heavy repulsorlift vehicle armed with a turbolaser, and was designed to destroy troop ships and landing vessels before they could deploy their troops and tanks. This was a very economical way of stopping invasions, since a Destroyer cost only a fraction of that of a landing ship, and could be deployed against enemy installations as well. This led to the Naboo Destroyer selling well to other worlds as well as the home market it was concieved for. During the reign of the Empire, the Rebellion managed to get their hands on a few Naboo Destroyers, which help protect a number of installations before their eventual destruction by an Imperial bombardment. In the New Republic era both the Empire and the Republic have a few Naboo Destroyers, and although weak in comparison to newer turbolaser equipped vehicles, their speed and ability to be deployed over both land and water makes them still very useful.