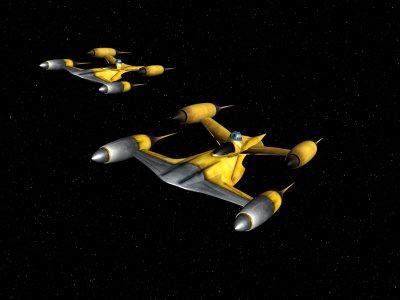 Description: The final modified version of the Naboo Starfighter released by Theed Palace Spaceworks, the N-8 was directly designed to match the recently released X-Wing Fighter, and although no tougher and no better armed than its predecessors, the N-8 is faster and more manueverable. The agility of this vessel is incredible, and was only finally matched by the A-Wing, and its high speed only surpassed by the Tie series of fighters, compensating for the aged design in a number of other areas. Sales of this design really took off, but weapons restrictions introduced by the Empire caused production to be ceased, stopping the supply of the vessel to the newly founded Rebel Alliance for whom the vessel had actually been covertly designed for. A very few of these vessels were supplied to the Rebellion, but fortunately the Incom design team defected, so that the loss of the N-8 did not cause the Rebels and particular harm. The Theed Palace Spaceworks were impounded by the Empire and turned over to Sienar, ending the production of this nimble vessel forever. It is rumoured that at least one Squadron of the Naboo Defence forced turned to independant Rebel activities using stolen N-8's, these are said to be the cause of a number of Imperial Defeats in and around the Naboo Star System.