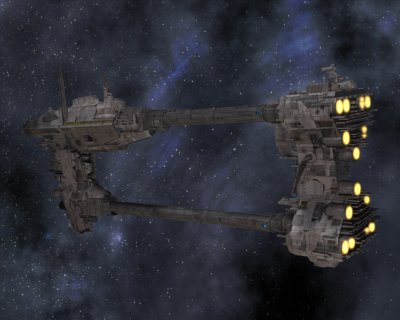 Description: The Nebulon-B Frigate was introduced by the Imperial Navy to deal with the increasing problem of Rebel Starfighter attacks on convoys and fleets, however the vessel suffered from underpowered engines and weapons both of which allowed Rebel Starfighters to outmanuever and threaten these capital ships. The Nebulon-B Heavy Frigate is an upgrade to the original design which was sold as new and also performed as a refit to already operational Nebulon-B's, and consisted of the addition of a new engine section mounted to the bottom of the current engine housing, and connected to the forward hull by an additional spar. As well as providing an increased sublight speed, the engines provided far more power which allowed the vessel to be upgraded in a number of other ways including upgraded anti starfighter weaponry as well as an all round increase in the number of weapons carried by the vessel. Other upgrades included increased hyperdrive speed, boosted shielding and increased manueverability, all of which made the vessel the threat to Rebel Starfighter attacks that the original vessel was intended to be. The Galactic Empire bought a number of these vessel, and planned to upgrade already operational Nebulon-B's to this standard, but the Battle of Endor and the financial difficulties that the Empire was plunged into afterwards meant that this never happened and the Nebulon-B Heavy Frigate never became as common as intended.


Page designed in Notepad, logo`s done on Personal Paint on the Amiga.
Text completely by FreddyB. Image is by "Bob the Dinosaur" based on work by LucasFilm, copyright remains with the Artist.
Any complaints, writs for copyright abuse, etc should be addressed to the Webmaster FreddyB.