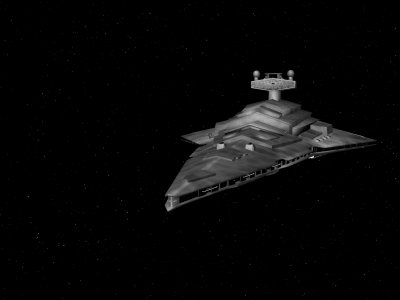 Description: The Nemesis Class Star Destroyer is a specialised variant of the Imperial Class Star Destroyer designed to assault planets and to drop troops and supplies onto a planetary surface. The hull has been enlarged slightly for this purpose, and accomodation added for extra troops as well as facilities for extra shuttles and landing craft. Other small alterations to the vessel were implemented to aid it in this role, the reduction in the ships number of anti-capital ship weapons to make room for anti-starfighter weapons, so that the Destroyer can defend its shuttles and troops as they decend to a planets surface from Starfighter attack. These Destroyers were only built in small numbers because of their specialised role, but they easily equal the capability of normal unmodified Imperial Class Star Destroyers and can be used in a normal Destroyer role. Nemesis Class Star Destroyers became popular with some of the Imperial remenants as they were better suited to the many planetary attacks and assaults that were common during this era, but obviously these resource starved governments could not choose to be picky and Nemesis's remained rare as their construction remained expensive.