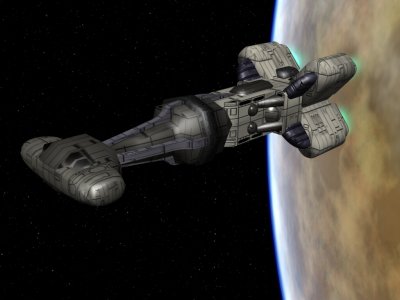 Description: The Corellian Corvette has served the Rebellion from its foundation as a transport, combat and courier vessel, with its powerful engines and high manueverability. So when the Empire was defeated at Endor, and the New Republic was founded and gained legitimacy, the leaders approached the Corellian Engineering Corporation for an updated version of this fine vessel to serve the New Republic as an official vessel. The New Republic Corvette was the result which was released after a couple of years of development work, slightly faster, and much better armed, this vessel an acts in a number of the same roles as the older corvette design, but is much more obviously a military vessel, with its enhanced hull armour, troop carrying capacity, and much smaller cargo hold. The New Republic has bought the vessel in reasonable numbers, where it serves along side its older brother, and a number have also been sold to private concerns, much to the dislike of the New Republics leadership.