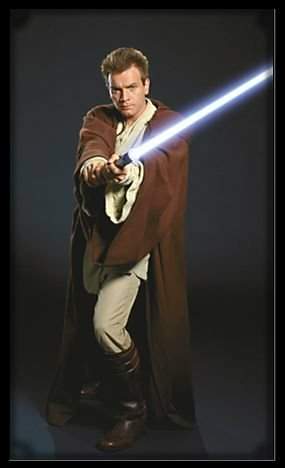 These are the known powers Obi-Wan Kenobi possessed and it is believed that he had access to other powers.


A dedicated and legendary Jedi Knight, Obi-Wan Kenobi had a long and tumultuous career that has helped shape the fate of an entire galaxy. When he was 25 standard years old, he was caught up in the important events of the Battle of Naboo. At the time he was a Padawan learner, apprenticed to Jedi Master Qui-Gon Jinn.

Following his Master, Obi-Wan voyaged from Naboo to Coruscant and back during the intrigue that surrounded the Battle of Naboo. When Qui-Gon Jinn brought a freed young slave boy, Anakin Skywalker, before the Jedi Council, Obi-Wan was taken aback. Qui-Gon claimed that Anakin was the Chosen One of an ancient Jedi prophecy, and that he was to be Jinn's new Padawan learner, replacing Obi-Wan. The council refused Jinn's proposal to train the boy.

This was just one of many disagreements that Obi-Wan Kenobi and Qui-Gon Jinn had during their time together. Jinn, a proponent of the living Force over the more serene unifying Force, had long been a maverick in the eyes of the Jedi Council. Obi-Wan implored his Master not to go against the Council, but Qui-Gon always responded by saying that he must do as the will of the Force advises.

During the liberation of Naboo, Qui-Gon and Obi-Wan were challenged by a deadly Sith Lord. A forgotten menace, the Sith had returned after centuries of seeming extinction. For the first time in ages, Jedi and Sith dueled. The dark warrior, Darth Maul, used his incredible speed, rage and his double-ended lightsaber to fend off both Jedi. As the duel progressed, Obi-Wan and Qui-Gon became separated. Kenobi watched helplessly as Maul killed Qui-Gon, and he rushed to kill the Sith Lord in turn.

Qui-Gon's dying words were a request for Obi-Wan to train Anakin, despite the Council's objections. The Council ultimately agreed with Obi-Wan taking Anakin as a Padawan -- though Jedi Master Yoda had strong reservations about it. The Council also bestowed upon Obi-Wan the title and rank of Jedi Knight.