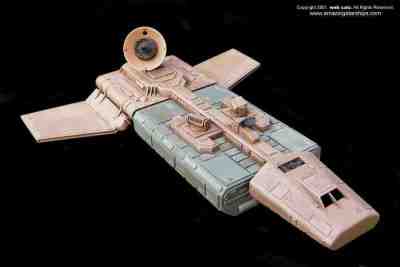 Description: The Omega Class Transport is part of the series which also spawned the Lambda class shuttle, and the Sentinel class troop transport. It shares a number of features with its sister ships, but is a slightly older design so is somewhat more primative than them. The Omega is a cargo vessel, aimed towards the military market so is equipped with excellent weaponry and sensors for a transport vessel, it also has a massive cargo capacity. These vessels are far more expensive than both civilian transports and smaller transport vessels like the Sentinel class, so the Empire only bought these in limited quantities, however what the Empire considered to be limited quantities was a massive amount, meaning that many hundreds of thousands of these vessels were built. They continue to ply the spacelanes transferring small cargoes wherever the Empire needs them, although a few have also fallen into civilian hands where this heavily armed transport has found itself perfectly at home. As well as being treasured by pirates, smugglers as well as more legitimate cargo transporters, the Omega has also become a favorite of some bounty hunters, especially the bounty hunter Dengar who uses a Omega as his primary base of operations. A source of much debate is the removable cargo bay, which can be dropped off to free the Omega for its next cargo, although this is a very useful feature for the Imperial fleet of Omegas, it is extremely unlikely that a cargo operator will have both an Omega and a supply of cargo bays to take advantage of this feature. However it has led to some daring robberies when owners of Omegas have swooped in to snatch away a valuable Imperial cargo, although the chances of ending up with a cargo bay of Imperial troops is one of the risks of this kind of operation. The Concussion Canisters used by the Omega are now outdated, but remain in production just to supply the Omega, due to the impressive cost that it would take to replace all of the launchers on the entire Imperial fleet of Omegas.


Page designed in Notepad, logo`s done on Personal Paint on the Amiga.
Text completely by FreddyB. Image is from www.amazingstarships.com, copyright remains with the artist.
Any complaints, writs for copyright abuse, etc should be addressed to the Webmaster FreddyB.