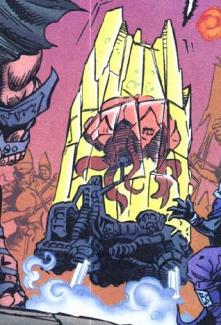 SPECIAL ABILITIES
Broadcast Telepathy: As their primary mode of communication, Celegians can speak telepathically with any number of creatures within 500 meters. Anyone wishing to resist this telepathic communication must make an opposed Willpower or Control skill roll against the Celegian's own Willpower or Control skill. This ability cannot be used to "steal" memories or information.

Story Factors:
Cyanogen Breathers: Celegians cannot survive without their native atmosphere. After being exposed to an oxygen atmosphere for 1 round, a Celegian must make a Moderate Strength check, with the difficulty increasing by +4 for every round past the first. If successful, the Celegian remains conscious, but must continue to make Strength checks until returned to its native atmosphere. Failure indicates that the Celegian falls unconscious, and takes 1D damage. This damage is increased by +1D for each round afterwards (cumulative). Exposure to the cyanogen atmosphere has a similar effect on oxygen-breaters. Celegians outside of their environment exist in transparisteel life-support chambers. These chambers have an effective Body Strength rating of 4D+2 when resisting damage.

These are the known powers Ooroo possessed and it is believed that he had access to other powers.


Ooroo was the ancient Jedi Master who taught the venerable Odan-Urr.

An ocean creature native of a world with a dense, cyanogen-rich atmosphere, Ooroo was a brain-like creature encased in a yellow crystal which maintained the cyanogen atmosphere in which he survived. Ooroo went to Cinnagar to visit with Empress Teta and Odan-Urr shortly after his student was ridiculed on Coruscant for believing in an imminent Sith attack. Ooroo, however, believed that his student was correct in the interpretation of his vision, as were several other Jedi Masters. Ooroo and Odan-Urr led the defense of Kirrek when Naga Sadow finally launched his attack, but they were unable to turn the tide of battle with the Force. Ooroo, seeing that he alone held the key to the battle, told the Jedi to seek shelter and then cracked open his crystal shell. The cyanogen atmosphere was deadly to the Sith forces, which were killed almost immediately. However, Ooroo was unable to survive in an oxygen atmosphere, and expired in Odan-Urr’s arms. Like all Jedi Masters, Ooroo’s physical form dissipated as his lifeforce became one with the Force.