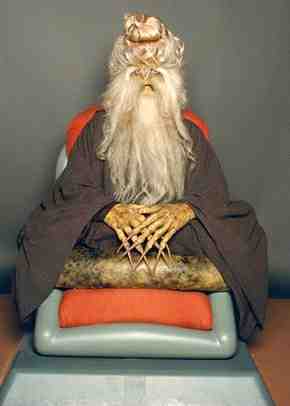 SPECIAL ABILITIES
Prehensile tail: Thisspians can use their tails to carry objects, leaving their hands free for other activities, but the Thisspian's Move is reduced to 2 meters.

Constrict: On a successful Brawling skill check made to grapple; a Thisspian can wrap its prehensile tail around an opponent. This increases a Thisspian's Strength by +1D+1 while grappling. An opponent so ensnared can escape, but must do so with an opposed Strength roll.

These are the known powers Oppo Rancisis possessed and it is believed that he had access to other powers.


A former student of fellow Council member Yaddle, Oppo Rancisis was a well-respected Jedi Master known for his unerring tactical mind and military expertise. His familial heritage earned him the title of Blood Monarch of Thisspias, though Rancisis denied the position, choosing instead to devote his life to the ways of the Force. His elegant strategies have allowed the Jedi to emerge victorious from several large-scale conflicts.

Rancisis was a master of malacia, a Jedi technique that produced powerful dizziness and nausea in his targets. The results are incapacitating, though do not do any permenant physical damage. Rancisis trained fellow Jedi in this art, but few mastered it to his level of proficiency.

Rancisis was 174 standard years old during the Battle of Naboo, an incredibly ancient age for a Thisspiasian. Among his exploits was serving as a fleet battle strategist during the bloody Stark Hyperspace Wars.

The shaggy-haired serpentine Jedi Master Oppo Rancisis sat on the Jedi Council during the waning years of that august order. He was present when maverick Jedi Master Qui-Gon Jinn brought young Anakin Skywalker before the Council to be trained as a Padawan.