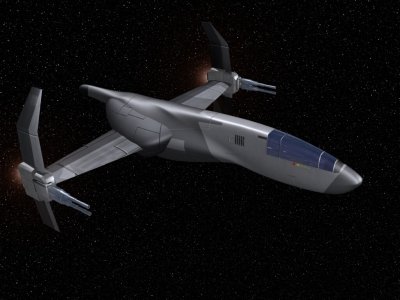 Description: The Parvati Starfighter is a contemporary of the X-Wing and Y-Wing Classes of Starfighters which were released at the beginning of the Galactic Civil War. With powerful laser cannons and better performance than earlier fighters, the Parvati looked set to see great success however two problems hampered this and led to the fighter suffering fairly poor sales and being removed from the market rapidly. Firstly the X-Wing upped the stakes for starfighters of its era, showing a quantum leap in combat effectiveness and performance it caused a large number of fighters to look slow, cumbersome and fragile. Secondly the increased weapon restrictions imposed by the Empire caused sales of all military fighters to drop, causing a large number of corporations to have difficulty recovering the finance they invested in new starfighter designs. These factors led the Parvati to fail despite the fact that it is only slightly less effective than the X-Wing especially considering the fact that the X-Wing was not available on the open market and shouldn't have had any major impact on sales due to the nationalisation of Incom.