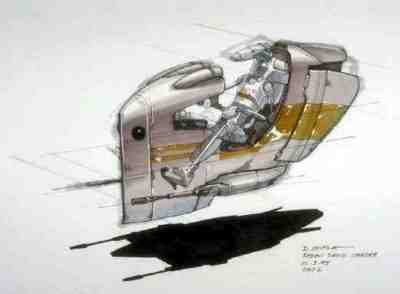 Description: Much like the Empire that defeated it, the Trade Federation produced a huge variety of different combat vehicles as it attempted to find the most economic and deadly, it also seemed to relish giving these vehicles ridiculous acronyms another thing in common with the Empire. The PASS is one of the many Speeder Bike clones that the Trade Federation created as an scout vehicle for their Droid Armies. The PASS was a fast and maneuverable speeder bike, mainly due to its ion afterburners and manuevering flaps. However this made it extremely expensive to build, and although the PASS was fantastic for scouting, it was poor in combat due to its fragile build and weak weapons. These combination of factors meant that the Trade Federation dropped the design, although some attempts to improve the design were made, the few production models were mainly put into storage or into service on the fringes of the galaxy to free up STAP's for use during the Clone Wars. PASS's have become popular since the remainders of this design were sold off by the Empire after being captured at the end of the Clone Wars, and can reach a high price when they rarely appear for sale.