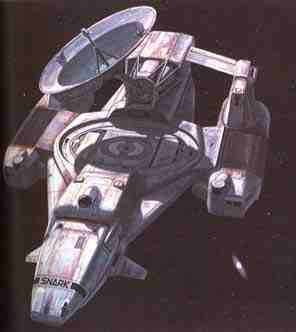 Description: The Pathfinder Sensor and Command Vessel was designed by Sienar to complement the Tie Phantom, and other Imperial Cloaked ships. Using a CGT/Gravity Generator, the Pathfinder can communicate sensor and targetting data with cloaked fighters allowing them to operate and fight while cloaked. The Pathfinders powerful sensor capabilities have also been used by the Empire in other roles, but the ships weak defensive capabilities almost always require it to have an escort of fighters which other scout vessels do not require. Because the Pathfinder is designated a command vessel, it also can carry a commander and aide and is outfitted with an advanced communication system to allow them to issue commands and control their forces. The Sensor array of the Pathfinder can be deployed for use, but its size causes problems when docking or when the ship is attempting to maneuver in an atmosphere, so the sensor dish can be locked into place flush against the upper hull for these times, this however reduces a sensor ranges to one fifth of their stated distances.