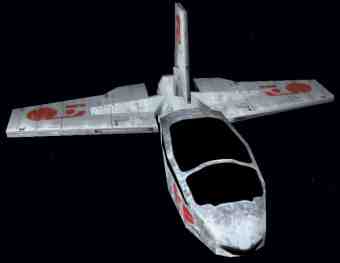 Description: The Pinook was released shortly before the Y-Wing fighter, and although it was slightly faster than both the Z-95 and the Y-Wing, it has poor maneuverability, and weak arms and shields. This has led to it being considered nothing more than a flying target and the line was discontinued after a very short time. However the low second hand price has led to the fighter leading a very productive life since it was discontinued, and the vessel is still a common sight along the space lanes. The Pinook is not fitted with a hyperdrive so usually operates from a carrier, where repairs to this fragile craft can also be performed, this means that Pinooks are usually seen in groups operating as pirate raiders, or even defence craft. Spare parts for the Pinook are still produced and account for a large percentage of Joraan Drive Systems profits each year.