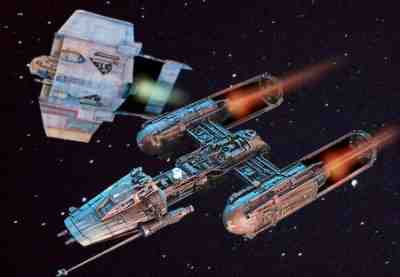 Description: The Y-Wing fighter is one of the most common starfighters ever built and many hundreds of variant designs of this fighter have come into existance, with some official and mass produced models built, and others like this, customised Y-Wings thrown together in black market factories across the galaxy. The Pirate Y-Wing is similar to the "ugly" starfighters put together by pirates and criminals throughout the galaxy, although this fighter is more heavily based on a single fighter design. The Ion Cannon turret of the Y-Wing has been stripped off and replaced with a Heavy Laser Cannon turret, allowing the gunner to inflict more damage on the fighter's targets. An extra laser cannon has been added to the fighter, taking power from the removed Proton Torpedo Launcher system, and firelinked with the original two heavy laser cannons on the front of the fighter. Although the three cannons do not produce any extra damage over and above the standard two cannons, however they have been tuned for extra range, with the three cannons extending the weapon range by 40%. Although the Pirate Y-Wing is an effective and deadly starfighter, many pilots consider its laser cannon only armament to be poor, without the punch of the Proton Torpedoes and without the disabling capacity of the Ion Cannons, however the extra range of the vessels front weapons and the laser turret make it powerful and capable enough to deal with most enemy fighters.