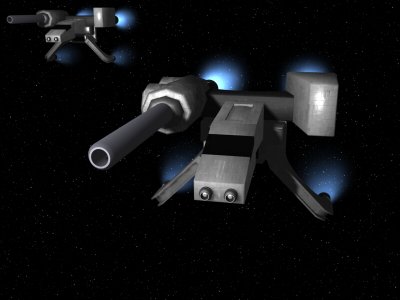 Description: Dating back to the founding days of the Old Republic or perhaps even earlier, the Preor fighter was one of the first space combat vehicles ever built. The simplicity of the technology used, means that even the most poorly educated engineer can repair and maintain these vessels (+2D to Tech when working on this class of vessel, due to its low technology), but this advantage is also its weakness, titanium armour, directed thrust engines and a Plasma Stream Cannon make this vessel extremely dated. While the Plasma Stream Cannon is extremely powerful and has a long range, its slow fire rate makes it a liability in combat against modern fighters, however in its day the range and power of the weapon made it a winner in combat since the Variant E could engage and defeat enemy vessels long before they entered their own weapon range. These fighters are very rare these days due to their extreme age, but those which are found are only used by the truly desperate who can afford nothing better than a several millenia old design.


Page designed in Notepad, logo`s done on Personal Paint on the Amiga.
Text completely by FreddyB. Image is by "Bob the Dinosaur", copyright resides with them.
Any complaints, writs for copyright abuse, etc should be addressed to the Webmaster FreddyB.