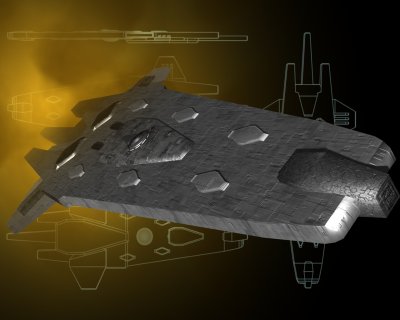 Description: The Protege Class Cruiser was Rothana Heavy Engineering's answer to the Star Destroyer, a massive well armed starship capable of taking on the best that the Confederation could throw at them. However the Protege is a slightly smaller and weaker vessel, which is considerably slower as well, making it vulnerable to being outmanuevered. So although the Protege is better armed, it has a history of poor performance in battle leading to the Republic buying very few of these vessels, which in turn led to the further development of the Star Destroyer line of vessels which eventually became such a signature for the Galactic Empire. However the Protege itself is still a fine vessel, and the excess vessels from the Republic were sold off to a number of planetary governments, who liked these powerful vessels and the availability of spare parts from the very similar and compatible Acclamator Class Transports. The Rebellion was given some Protege's by worlds pledging their allegiance, but could never muster enough manpower to fully operate these vessels, so they remained unoperational until the New Republic was founded and manpower became less of an issue.