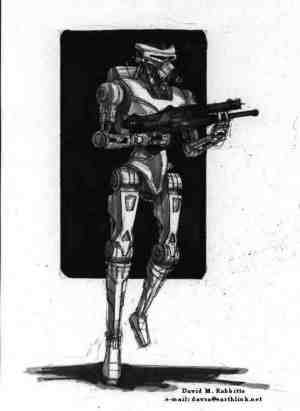 Description: The Trade Federation relied upon their Battle Droids for their armies both before and during The Clone Wars, but these droids were not perfected straight away. Prototype Battle Droids were more simplistic than the final model, although more heavily armoured, designed to operate from their own intelligence rather than a centralised system they were less skilled than the completed droids, but their low price led to their production and use in great numbers to reinforce their more capable brothers. Few of these droids have survived until the modern day, but those that have are popular as bodyguards and soldiers because they are less recognisable than the standard Trade Federation Battle Droids, making it far mroe likely that these droids will not attract the attention of the authorities.


Page designed in Notepad, logo`s done on Personal Paint on the Amiga.
Text completely by FreddyB. Image is by David M Rabbitte, copyright resides with him.
Any complaints, writs for copyright abuse, etc should be addressed to the Webmaster FreddyB.