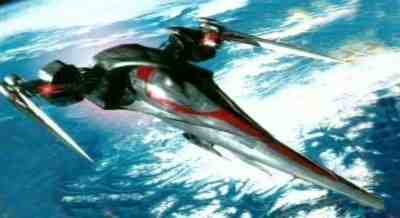 Description: The military of the near-human Sebaceans are the Peacekeepers, who are equipped with this superb fighter, which is a match for anything the Empire or Republic can field. Well armed, fast, and tough, the Prowler is a stealthy fighter (+5 target numbers to detect), with excellent manueverability but a poor hyperdrive, however since these fighters are usually carried aboard Peacekeeper Command Carriers this rarely matters, and does not disadvantage the fighter in combat. Prowlers are easily maintained, and are extremely reliable, but this is unremarkable since the Sebaceans "borrow" all the technology they need from the galactic community, relying on their military to make them a power in the galaxy. Prowlers are respected by those who have faced them in combat, and their striking appearance helps them strike fear into their opponents. The fact that the fighter can also carry a single passenger, allows it to be used for a much wider variety of roles than a simple attack fighter, for instance Peacekeeper Marines often deploy from Prowlers, also with the second seat configured as a gunner the Prowler can carry and deploy specialised weapons, finally they are occasionally used as transports for important passengers.


Page designed in Notepad, logo`s done on Personal Paint on the Amiga.
Text completely by FreddyB. Image is from the series Farscape, copyright resides with the makers.
Any complaints, writs for copyright abuse, etc should be addressed to the Webmaster FreddyB.