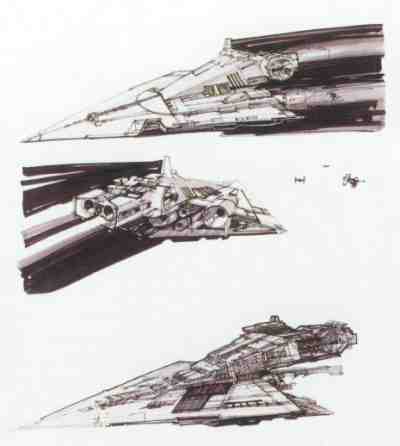 Description: With the increasing popularity of Blockade Runners and other vessels which were specifically designed to outrun Star Destroyers, there grew a desire within the Empire for a modified Star Destroyer design to outrun and catch these vessels. The Quasar Class Star Destroyer was designs with these desires in mind, and is an extremely fast and manueverable Star Destroyer, which while smaller and weaker than other Star Destroyers, can still match most other capital ships while managing to equal some starfighters for pure speed. However with Interdictor Cruisers stopping enemy ships escaping into hyperspace, and with Imperial vessel outnumbering enemy vessels by many times, the need for this vessel was felt to be small, and the idea of a smaller weaker Star Destroyer was not popular in many parts of the Empire. Quasar's therefore were only built in small numbers, and tended to operate as part of Imperial Squadrons, catching those few vessels which managed to evade the squadrons firepower. But after the fall of Emperor Palpatine, Quasar's, like the older Victory Class Destroyers, found themselves in great demand as other Star Destroyers became less common.