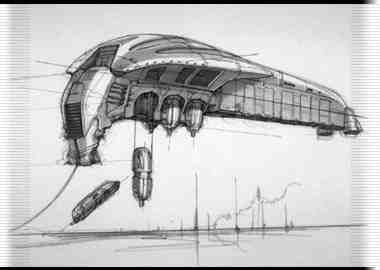 Description: The RDLS was a shortlived design of landing ship, which could carry 6 MTT's and 30 AAT's. These were deployed while the ship was still in flight, from doors built into the bottom of the ship. However the main disadvantage with this design, which led to eventual abandonment was that MTT's were deployed nose down, so if the RDLS was flying too low or if the pilot just wasn't skilled enough, the MTT would impact on the ground rather than successfully completing its turn and flying off. While the advantages were significant in deployment time, the RDLS was withdrawn from service as soon as other landing ships were developed and the ships were dumped onto the market where they are used as ordinary transport ships, abeit with a large crew requirement.