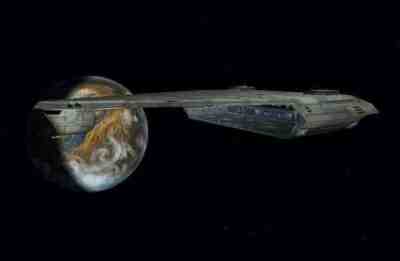 
When the Sullistans allied with the rebellion, they secretly modified a number of their Quasar-Fire class vessels. The modified ships became Cruiser Carriers capable of carrying 48 fighters, this was more than any other Alliance vessel (Mon Calamari vessels can only carry 36) making these an important asset for the Rebellion. However all but three of these vessel were crippled during the liberation of the Virgillian system, the rest required dry dock repairs before they could be used once again.

Although most were refitted back to their original status, three were once again modified (The Rebellion, The Liberation and The Freedom). The modifications made to these three vessels were to improved their versatality in combat, the original versions were lightly armed for defence and usually dropped their fighter before retreating. They also devoted most of their crew to maintaining the fighters on board.

The B variants of the Modified Quasar-Fire cruiser carriers were more heavily armed and armoured to allow them to take an active part in a battle. They have improved shields, ion drive, hyper drive, sensors and also carry 100 troops for boarding and ground actions. While retaining an internal hangar for a smaller vessel to be stored (any ship up to 40 meters can be held). These modifications cost the ship 2000 tonnes of cargo space, which means that the B variant can only carry 24 fighters. Also added were briefing rooms for the troops and pilots and a well equipped sickbay, these allow the ship to provide an all round mission profile.

The three B variants have been used for diplomatic missions, and for exploration, where a less well equipped vessel could not manage.


Page designed in Notepad, logo`s done on Personal Paint on the Amiga.
Text completely by FreddyB. Image is from a web page I`ve now forgotten where, but copyright resides with LucasFilm.
Any complaints, writs for copyright abuse, etc should be addressed to the Webmaster FreddyB.