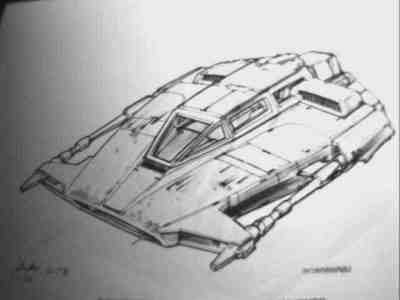 Description: Although the Rebel Alliance had a large number of T-47 Air Speeders, a lot of these were lost at the Battle of Hoth, and the Rebellion was forced to improvise as so often they had before. Rebel engineers took the cockpits of critically damaged Y-Wing fighters and re-fitted them with starfighter repulsorlift drives. To the outside of this they slung on heavy laser cannons, and reworked the internal electronics, to male a redumentary but servicable Air Speeder. Although slower and far less manueverable than the speeders they had used before, these "Ugly" refits were solid and could take quite a beating in combat, earning themselves a place of respect with soldiers on both sides of the war. When the Rebellion became the New Republic and gained access to new resources these speeders were sold off, some ending up in the hands of private individuals, but most ending up in the forces of Republic member worlds who needed whatever defence craft they could get to defend themselves against Imperial reprisals.