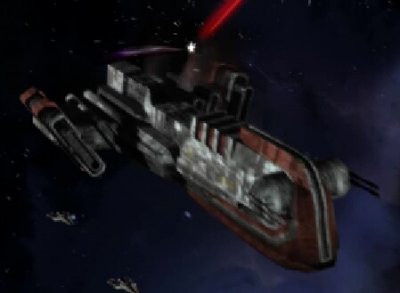 Description: The Corellian Engineering Corporation Republic Gunship class of capital ship was designed and built between the Sith War and the Mandalorian Wars. These small, fast and heavily armed, for their time, vessels comprised most of the Republic Navy, and served with distinction under the command of the Jedi Revan and Malak, however after the two Jedi turned against the Republic these vessels suffered the brunt of the following war. Capable of carrying 6 Starfighters in external racks, the Gunships also acted as the carriers of the Republic Fleet, but even in this role found themselves seriously outclassed by the masses of StarForge produced Leviathan Class Destroyers and Sith Starfighters. Republic Gunships were the most common capital ship of their era, but the majority were destroyed in the war against the Sith, and few survived the millenia till the rise of the Galactic Empire and those that did were relegated to service on the galactic rim on backwater worlds which could not afford newer and better capital ships.


Page designed in Notepad, logo`s done on Personal Paint on the Amiga.
Text completely by FreddyB. Image is from Knights of the Old Republic, and copyright remains with BioWare / LucasArts.
Any complaints, writs for copyright abuse, etc should be addressed to the Webmaster FreddyB.