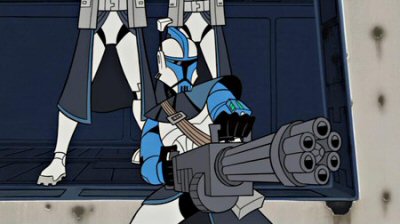 
*: The Rotary Blaster Cannons high rate of fire means that its users can lay out a virtual wall of fire, this combined with the built in recoil compensation allows the user to make his first 5 shots without multiple action penalties, however the recoil compensation also absorbs some of the operators body movement making it much harder to dodge giving opponents a bonus 3D to hit them. The weapon is also heavily prone to malfunction and grinds to a halt on the first roll of a 1 on the wild die for operating the weapon.

Description: A heavy infantry support weapon, the Merr-Sonn Z-6 Rotary Blaster Cannon debuted during the Clone Wars, though conceptually, multi-barreled rotary cannons are not without precedent in other cultures. The Z-6 was considered the most evolved of this weapon type, though it only ever saw limited application during the Clone Wars.

The Z-6 uses a rotating multiple barrel assembly to bypass the refresh lag inherent in the galven circuitry that lines the barrels of blaster weaponry. Galven circuitry collimates the excited plasma charging through a blaster. The conductive circuitry refines the plasma into the discreet "bolts" that emerges from the barrel. Galven circuitry has practical limits to its exposure to energetic plasma, which dictate a weapon's fire rate. Too much exposure leads to damaged circuitry, resulting in entire barrels needing to be replaced after overheating.

The Z-6 works around this limitation by incorporating six barrels in rapid rotation, each with alternating galven channels, with the whole assembly wrapped around a coolant-lined core. The alternating galven channels result in longer barrels, but only half of that barrel length has its galven circuitry active with each shot. Furthermore, the time it takes for a barrel to make two rotations is enough to allow the galven circuitry to cool to acceptable levels. This means the Z-6 has a tremendous rate of fire, maxing out at a tremendous 166 rounds per second.

The Z-6 has several notable drawbacks. Its high rate of fire means a high rate of ammunition consumption. An armored disk of blaster reactant gas is housed behind the barrel of the cannon. The lasing process and the electromotors that spin the cannon are powered by chained energy cells that give the Z-6 its common nickname, the "chaingun." The gun is heavy and also suffers from recoil. While Merr-Sonn has experimented with gyroscopic mounts and repulsorlift-powered load balancers, such accessories make the already mechanically-intricate weapon exceedingly complicated and prone to breakdowns, particularly in remote operations with unforgiving natural elements.

The Z-6 has proven incredibly effective in clearing landing zones, but troops in the field have found it to be too cumbersome and glitch-prone for widespread use. It is instead reserved for special missions with specific tactical demands.


Page designed in Notepad, logo`s done on Personal Paint on the Amiga.
Stats by FreddyB. Image and Descriptive Text is from StarWars.com, copyright resides with LucasFilm. Any complaints, writs for copyright abuse, etc should be addressed to the Webmaster FreddyB.