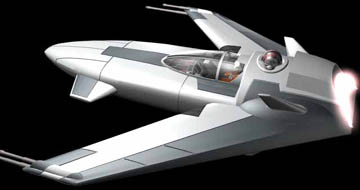 
Sensor Mask: For 80,000 credits per die (maximum 2D) the R-Wing can undergo an anti-sensor treatment at the Sluis Van Shipyards. This adds +1D per treatment to a sensor operator's difficulty to detect the ship.

Description: The R-Wing is a cutting edge one-man fighter, capable of high maneuverability at sublight speed, and possesses an efficient hyperspace engine. Although a nice fighter in its own right, the Sluissi have incorporated many new ideas to this ship. The R-Wing does have one use it excels in however; the small one-man design is very useful for hiding in the larger ships sensor shadow and ambushing pirates and raiders as they attack. The R-Wing is officially designated an escort fighter, the pilot can cover its sensors efficiently, but this role is more commonly taken by the larger ships it escorts and relayed to them. As the Alliance evolves into the New Republic it is likely that they will exchange some of these craft to some of the newer Republic worlds so that their pilots can start training with new advanced Sluissi designs. The small size, superior maneuverability, advanced absorbent materials and sensor fragmentor, means that the R-Wing is treated as Speeder scale for the purpose of targeting it.


Page designed in Notepad, logo`s done on Personal Paint on the Amiga.
Text by K. Image is by Jeremy Kincaid, copyright resides with them.
Any complaints, writs for copyright abuse, etc should be addressed to the Webmaster FreddyB.