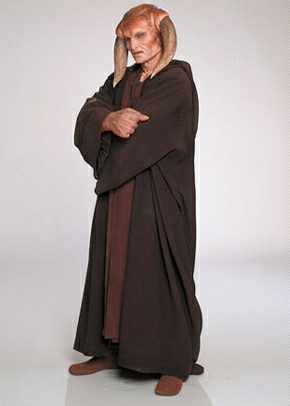 These are the known powers Saesee Tiin possessed and it is believed that he had access to other powers.


Jedi Master Saesee Tiin, a telepathic Iktotchi from the Iktotch moon, received training from Master Omo Bouri, a famed Wol Cabasshite. Bouri instilled a strong sense of conviction in Tiin, honing the Iktochi's skill and dedication to the order to the point that some would describe Tiin as fanatical. After the death of Bouri, Tiin's devotion only increased. The stern, contemplative Jedi often kept to himself, and Tiin was never known to take a Padawan. Tiin's loner tendencies caused some to privately question his value to the Council since his contributions were minimal.

Despite such hushed criticism, Tiin was a formidable warrior and an incredible pilot. His Iktotchi heritage granted him strong telepathic abilities, and helming his personal SoroSuub Cutlass-9 craft, the Sharp Spiral, through the relentless winds of Iktotch taught him unparalleled control. Tiin was so in tune with his vessel, that he had no need of a nav computer; he relied on the Force to instinctively astrogate his way through lightspeed.

Tiin had a keen eye for flight technology. He took considerable interest in Darth Maul's Sith Infiltrator when it was discovered on Naboo. Though the rest of the Jedi Council had reservations regarding Anakin Skywalker customizing his Jedi starfighter, Tiin encouraged the young man. Tiin was appreciative of Anakin's solutions to the Delta-7's limitations, and petitioned that Anakin's modifications be incorporated into future designs of the craft.

Tiin's piloting skills were put to great use during the Stark Hyperspace Wars, and more importantly, the Clone Wars. One close call in that epic conflict led to a low-altitude bail out, which Tiin escaped with minor injuries. He was soon back in action, having healed and regrown a broken horn. Shortly thereafter, Tiin was appointed official liaison between the Jedi Council and Freedom's Sons, a growing mercenary group that helped the Jedi Knights during the Clone Wars.

The imposing Saesee Tiin was a member of the Jedi Council during the final years of the Republic. He served that noble assemblage during the commotion of the Sith's return surrounding the events of the Battle of Naboo. Tiin voyaged to Naboo to attend the funeral of fallen Jedi Qui-Gon Jinn, and the jubilant celebration that marked the liberation of that outlying world. Ten years after this event, Tiin was still an active member of the Jedi order.

Tiin was one of a group of Jedi Masters gathered together by Mace Windu to arrest Supreme Chancellor Palpatine. Palpatine refused to go quietly; he sprang forth, imbued with the power of the Force, and cut down Saesee Tiin, killing him quickly.