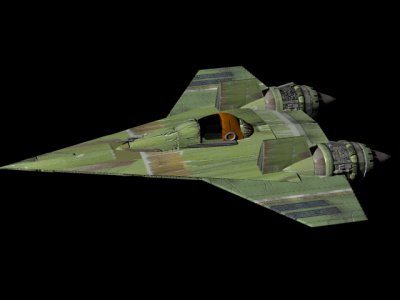 Description: As Sienar moved over to production of the TIE series of fighters for the Old Republic and emerging Empire, their remaining commitments to provide Delta series Starfighters were handed over to other companies. Since they were already building the Torrent Starfighter for the Old Republic, Slayn and Korpil took over a large amount of the manufacturing required. So when the Jedi were abolished and the Republic scrapped production of the Delta series the Verpine were left with parts and partially built fighters without any market. The Delta-2000 is the Verpine designers improved version of the Delta-7, with an integral NaviComputer, improved armour, shields and weapons. The Starfighter has Proton Torpedos for extra punch in combat, and manages to keep many of the Delta-7's winning features such as speed and manueverability. Only a limited number of Delta -2000's were built enough to use up their supply of parts and uncompleted fighters, but due to the quality of the design these few were snapped up quickly and remain in use across the galaxy.


Page designed in Notepad, logo`s done on Personal Paint on the Amiga.
Text completely by FreddyB. Image is from the Star Wars Fan Film "Revelations" copyright resides with them.
Any complaints, writs for copyright abuse, etc should be addressed to the Webmaster FreddyB.