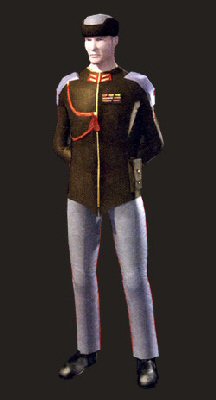 During the ancient Sith campaigns against the Jedi thousands of years ago, the corruption of Republic forces proved to be the most devastating weapon in the Sith arsenal. Highly placed Republic officials brought with them trained soldiers, advanced weaponry, and inside knowledge with each defection. After the Mandalorian Wars, Admiral Saul Karath, a pivotal figure in the victory over the Mandalorians, stunned his peers when he declared the Republic not worthy of his support. He transferred his allegiance to the Sith Lord Revan, taking with him a large number of troops and the Interdictor flagship he commanded, the Leviathan.

Karath was the first officer of significant rank to go over, and he set a dark precedent. Rather than face an enemy that knew their every tactic, several other officers followed his path.

Many that remained loyal to the Republic trained directly under the admiral -- such as the heroic pilot Carth Onasi. For Carth, the conflict became far more personal in nature. He saw Karath's defection as a personal blow that shook his ideals to the core. He swore vengeance, and would eventually find it when Karath was killed on the bridge of his own flagship during the Republic's hunt for the Star Forge.


Page designed in Notepad, logo`s done on Personal Paint on the Amiga.
Stats by FreddyB. Descriptive Text and Image is from Knights of the Old Republic, and remains copyright of BioWare / LucasArts.
Any complaints, writs for copyright abuse, etc should be addressed to the Webmaster FreddyB.