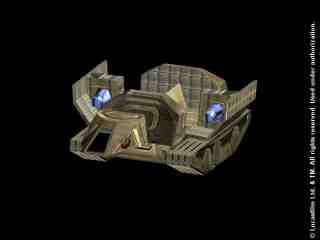 
Description: After the Imperial attack on Hoth, the Rebellion realised the disadvantage their forces were under since the Empire had overwhelming aerial support. The Rebellion had to create a method of stopping Imperial orbital bombardment of their locations, and fighter attacks upon their people, and therefore decided that the Empire couldn't use either of these without accurate sensor readings, since they might be firing on empty ground, or calling fighter support into an area with air defences. So the Scanner Jammer was built, a fairly ramshakle design based on the Jammers built for the A-Wing fighter slapped into a tracked ground vehicle, without any defences of its own, the Scanner Jammer however could accompany Rebel forces, and protect them from accurate imperial strikes, and also had the advantage of disrupting the Imperial Command and Control systems which were almost always orbital based, relying on sensors for input. Although this meant that the Scanner Jammers themselves became prime Imperial Targets, they still managed to provide critical support for Rebel retreats, or strikes virtually immune to organised Imperial responce.