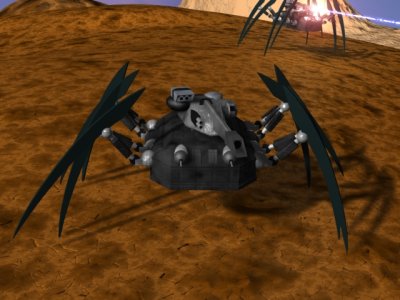 * : The Scorpion has a large main turret which three of its weapons are mounted onto, this means that they cannot be independently targetted or fired at the same time. The advantage however is that the 2 gunners in the turret can swap between the targets to take advantage of the range or power of the different weapons, making the walker more flexible than many others, and making good use of the small crew.


Description: Impressed with the effectiveness of Imperial Walkers, the Mandalorians copied the idea, however instead of just making the massive transports and scouts that the Empire uses, the Mandalorians adapted their own tank designs to take advantage of Walker technology. The Scorpion is a heavy walker with a heavy laser cannon capable of reducing most other walkers to scrap, as well as missiles to hit distant targets and smaller weapons to deal with Speeders and enemy troops. The legs are scimitar shaped allowing them to deal damage to opponents, even though they were not designed for this purpose, but some have reported that the lack of any cushioning foot has caused the walker difficulties in marshy terrain, but given the Mandalorians also have repulsorlift tanks and are capable of adapting their walkers to specific missions, this is at worst a logistical problem. Enemies of the Mandalorians have reported that facing Scorpion Tank Walkers in combat is terrifying, and that their speed, power and resiliance in battle makes them very difficult to beat.