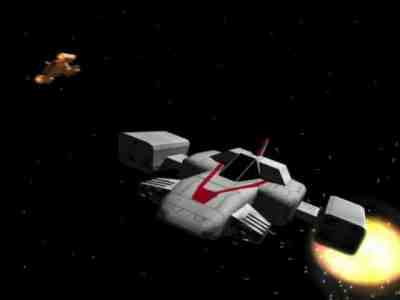 Description: Although mostly used as a starfighter, the Goushyn was actually designed as a personal transport, capable of carrying a single person plus a considerable amount of luggage from star system to star system. However the market it was seeking, that of executives and sales people, were not seeking a single person vessel, so the Goushyn had to marketed differently. And it found a market in interstellar scouts, who found it a very useful vehicle, capable of carrying themself, their equipment plus a speeder bike or scouting droid. The fact that the fighter is tough enough to handle itself in combat, with an extremely tough hull, and decent shields, as well as powerful weapons, the only problems reported were its poor handling, and fire-control systems, which made it too reliant on its toughness to stand a chance in combat situations. The Goushyn was discontinued from production because its small market was never enough to cover the costs of the vessels design, but these fighter continue to sell well on the second hand marketplace.


Page designed in Notepad, logo`s done on Personal Paint on the Amiga.
Text completely by FreddyB. Image is from a web page I`ve now forgotten where, copyright however resides with the artist and no dispute of this is intended by its use.
Any complaints, writs for copyright abuse, etc should be addressed to the Webmaster FreddyB.