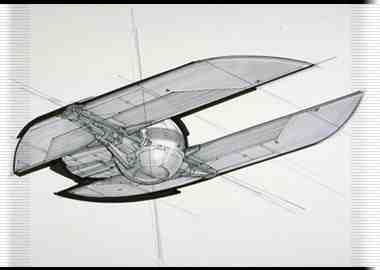 Description: After the Empire restricted use of the Holonet to official use only, it became a prime target for the newly established Rebel Alliance since destruction of segements of it disrupted Imperial operations. This meant that the Empire had to create a method of transmitting messages to worlds which had lost Holonet access due to sabotage and Rebel attack, for this purpose they began using courier ships as those without access to the Holonet had done during the reign of the Old Republic. For a short time the Empire started reintroducing the Star Courier class of courier ship, however the unarmed status of this vessel made it a prime target for Rebel attack, so Sienar introduced an armed version of the vessel. The Sie Courier uses developments of the Tie series of ships as well as some elements of the Star Courier, resulting in a fast and manueverable vessel which can make good of itself in skimishes. These ships are also sold on the open market and make good, if small, cargo vessels.