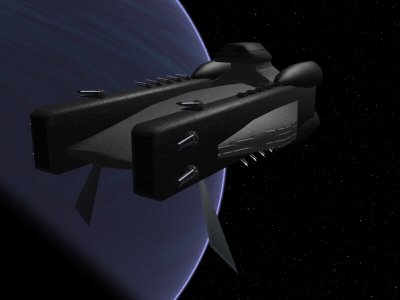 Description: The Siege Cruiser was designed for one purpose, one that it excels at, planetary offence. With its massive hangar bays it can launch numerous fighter squadrons and dropships, and its powerful weaponary can hammer surface and orbital targets, and even though this design dates back to the Old Republic, it is still a greatly desired and used design. Valiant class vessels still serve in Imperial reserve fleets, and in the front line of the Rebellion/Republic, they are still fairly fast and powerful vessels, which have a flair of design to them missing from many modern utilitarian ships. Siege Cruisers share many features with Star Destroyers, mainly because the design is an ancient ancestor of the modern capital ship, but also because both designs share a certain philosophy, that of sending a message to their opponents that these vessels are too powerful to be opposed.