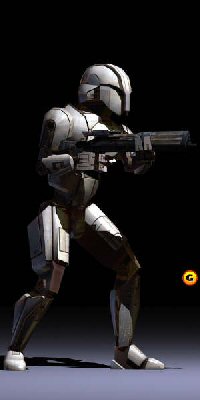 Description: These droids were one of the designs built using the Ancient technology of the Rakatan StarForge, they are more advanced than the droids of their time although galactic technology had caught up with these by the time of the Galactic Empire. These droids were used for patrol and attack duties replacing the Czerka droids which had been purchased for this role, however they themselves were beginning to be replaced by more advanced Rakatan technology when the Sith lost the StarForge. Based on Republic Technology, these droids were humanoid in design so that they could make use of all normal weaponry, but they were not programmed to use melee weapons, being instead intended to use Blaster weaponry.


Page designed in Notepad, logo`s done on Personal Paint on the Amiga.
Text by FreddyB. Image is from Knights of the Old Republic, and copyright resides with LucasArts / BioWare.
Any complaints, writs for copyright abuse, etc should be addressed to the Webmaster FreddyB.