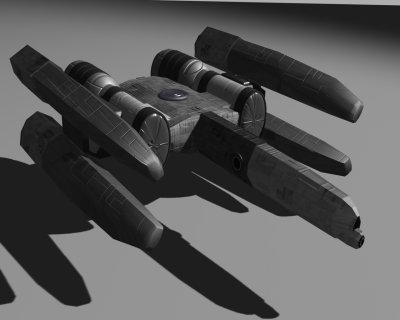 Description: These large and fast transport vessels predate the YT series by several decades, but have some resemblance to both these and the Corellian Corvette which replaced it. With a large internal cargo hold and four cargo pods which can be ejected or replaced, this is a roomy transport although obviously not on the scale of the Bulk Transports which carry most of the cargo in the Imperial Era. However in an age of light freighters and medium transports the SkyBreaker was roomy yet fast, although not armed from the factory floor, the SkyBreaker came ready to mount turrets into. Although a decent ship for its era, there were many complaints about the SkyBreaker possibly because times were changing and this vessel was either too large, or too small for most purposes, with neither the weaponry or shielding to defend its cargo and passengers. The passenger accomodation bears mentioning, with a luxury lounge and entertainment area for the passengers and crew as well as a full kitchen and dining area. The Dining and Entertainment areas are directly above the bridge and come with a spectacular view in front of the vessel, making this a popular vessel to live and work aboard.